Third Stop! The House of Caiaphas 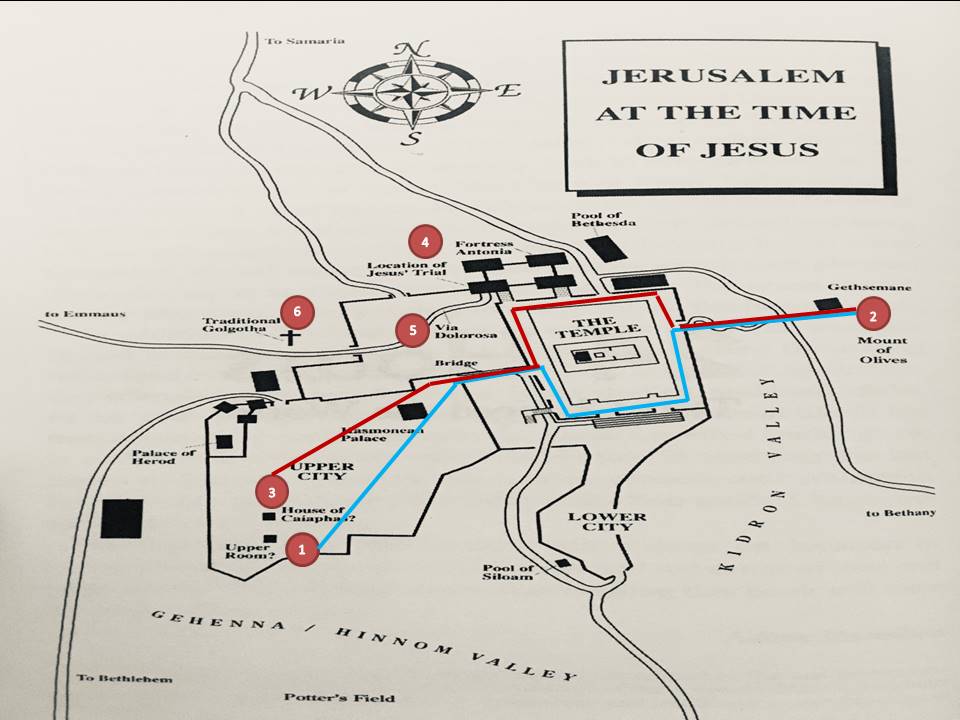 How are you doing today? Were any of you visited by a Leprechaun a few days ago? Let me tell you something…. When I woke up on St. Patrick’s Day, my cupboards were opened, the milk was green, the eggs were green, the box of Lucky Charms was spilled on the counter and all the marshmallows were gone, the water in the toilet was green, there was some gold in the cage of my bird, the pillows on the couch were missing, and there were little green footprints everywhere. I must have been visited by a Leprechaun! I think next year I am going to try to catch it! Do you know of any good traps I can use or make to catch a Leprechaun?

Speaking of traps, do any of you remember where we travelled last week? It wasn’t the Last Supper, but good guess. We stopped at the Garden of Gethsemane. Do you remember what happened in the Garden? That’s right, Jesus prayed! Jesus prayed while his disciples kept falling asleep. All Jesus wanted his disciples to do was stay awake but they didn’t follow his instructions. And because the disciples didn’t follow his instructions, Jesus was trapped by Roman Soldiers and High Priests–religious leaders–in the Garden. And guess what, even one of Jesus’ disciples–one of his friends–turned Jesus in: he told on Jesus. After being trapped by the bad people, Jesus was led to the house of Caiaphas, the leader of the High Priests.

So get in the car and buckle up! We are heading to Caiaphas’s house in southern Jerusalem. When Jesus arrived to Caiaphas’s house he was lowered into a pit. From this pit Jesus could hear everything that was being discussed: the people above him were trying to figure out what Jesus did wrong. I bet Jesus was scared, filled with fear, and probably wanting to escape from this pit. But he didn’t. Jesus chose to stay in the pit and pray to God. After several hours of being in this pit and listening to the people, Jesus is raised to the service and asked by Caiaphas, “Are you the Messiah?” And do you know what Jesus said? Jesus said, “I AM.” Instead of being quiet, like some of us are told to do when our parents are talking to us, Jesus spoke up and basically said, ” I am the one who has done all the things that your people have been talking about.”

In the house of Caiaphas, Jesus told the leaders, the Roman Soldiers, and all those who were able to listen that he is the Messiah–the Savior of the world who has come to save all people. Because Jesus spoke up, he chose to give his life to save you and me. Because Jesus spoke up and told the truth, we have received his love. What we learn at Caiaphas’s house is this: that we must tell the truth; and when we tell the truth we must be willing to face the punishment. So the next time you are asked, “Did you do this to your brother or sister,” don’t blame them, but tell the truth.

Our next stop will be to visit Pontius Pilate in his palace.